The Confident Hope Of A Miracle

In the winter of 1587 the Spanish Armada, the largest force of warships ever assembled, set sail to crush the English navy… pening at the execution of Mary Queen of Scots – the event that precipitated the launching of the Armada – Neil Hanson explores one of the most fascinating campaigns in European history over the eighteen months in which it developed. From the first whispers of the threat against England the the English crown to the return of the battered remnants of the fleet to Spain, it is a story rich in incident and intrigue which is told with a view to giving the reader a breathtaking overview. In this controversial study Hanson claims that the aim of Drake was not to sink the Armada ships but to disable and plunder them, and that Queen Elizabeth was a monarch who left many of the survivors of the battle to die of disease or starvation and whose parsimony, prevarication and cynicism left her unable to make crucial decisions. Drawing on previously undiscovered personal papers, Neil Hanson conveys in vivid detail how the highest and the lowest in the land fared in those turbulent months when the destiny of all Europe hung in the balance. 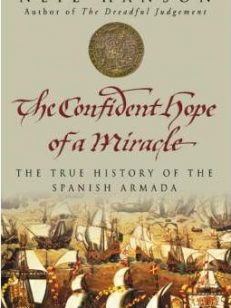 You're viewing: The Confident Hope Of A Miracle €12.00 Incl. VAT
Add to cart
Create a new list