This book examines how it was possible and what it meant for ordinary factory workers to become effective unionists and national political participants by the mid-1930s. We follow Chicago workers as they make choices about whether to attend ethnic benefit society meetings or to go to the movies, whether to shop in local neighborhood stores or patronize the new A & P. Although workers may not have been political in traditional terms during the ’20s, as they made daily decisions like these, they declared their loyalty in ways that would ultimately have political significance. As the depression worsened in the 1930s, not only did workers find their pay and working hours cut or eliminated, but the survival strategies they had developed during the 1920s were undermined. Looking elsewhere for help, workers adopted new ideological perspectives and overcame longstanding divisions among themselves to mount new kinds of collective action. Chicago workers’ experiences as citizens, ethnics and blacks, wage earners and consumers all converged to make them into New Deal Democrats and CIO unionists.

Be the first to review “Making a New Deal : Industrial Workers in Chicago, 1919-1939” Cancel reply 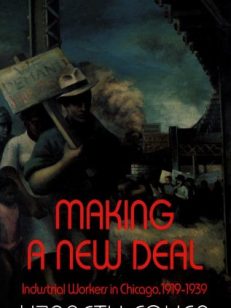