From Here To Eternity

Diamond Head, Hawaii, 1941. Pvt. Robert E. Lee Prewitt is a champion welterweight and a fine bugler. But when he refuses to join the company’s boxing team, he gets “the treatment” that may break him or kill him.

First Sgt. Milton Anthony Warden knows how to soldier better than almost anyone, yet he’s risking his career to have an affair with the commanding officer’s wife.

Both Warden and Prewitt are bound by a common bond: the Army is their heart and blood… and, possibly, their death.

In this magnificent but brutal classic of a soldier’s life, James Jones portrays the courage, violence and passions of men and women who live by unspoken codes and with unutterable despair… in the most important American novel to come out of World War II, a masterpiece that captures as no other the honor and savagery of men.

Be the first to review “From Here To Eternity” Cancel reply 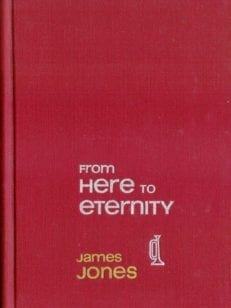 You're viewing: From Here To Eternity €5.00
Add to cart
Create a new list