Using subtle means of political power and economic control, a foreign power known as the “Rulers of the Upland” has taken over Egypt to plunder its riches and eradicate its religion and culture. In “The Hippopotamus Marsh”, the stunning first volume of Pauline Gedge’s Lords of the Two Lands trilogy, the family of the last true King of Egypt chose to end 200 years of submission to King Apepa, and attempted to resurrect a dynasty, Seqenenra Tao began a courageous and tragic revolt that almost led to the destruction of his family.

In this thrilling second volume, Seqenenra’s surviving son Kamose refuses an inheritance of failure, and chooses instead to continue his father’s fight for the freedom of Egypt and his family. He begins his desperate sweep north, collecting fighting men from the loyal towns and villages he passes. Will his savage brilliance bring him victory or defeat? And will his acts redeem him or drive him to the brink of madness?

Lord of the Two Lands #2

Be the first to review “The Oasis” Cancel reply 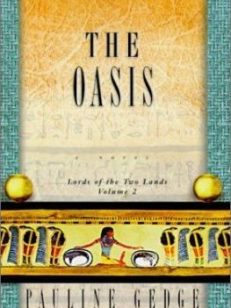