A DAY OF CHAOS – 22,000 MILES UP! Klementina Ristovych and Ralph
Dietrich are Homicide detectives on `The Fuse’, a five-mile long
solar energy platform orbiting above the earth that’s also home to Midway
City, population half a million. Ristovych should have retired years ago;
Dietrich is the first cop to actually volunteer for MCPD Homicide in its entire
history. Previously, cases have taken them from the very bottom to the top
echelons of Fuse society, and everywhere in between. But now it’s
Perihelion – the day when the Earth, and therefore the Fuse, is closest to
the Sun. And on this `Day of Chaos’, the population of Midway City
seems to go a little bit crazy! All leave is cancelled, all hands on deck… and
for the MCPD, all hell is about to break loose! Whereas the previous books
followed Klem and Ralph through a single case over several days,
`Perihelion’ follows them over the course of a single day, dealing
with multiple cases – from homicides to bomb threats and more besides!

Be the first to review “The Fuse Volume 3: Perihelion” Cancel reply 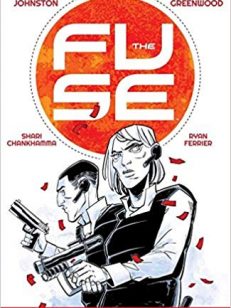