Why Aren’t They Here? : The Question of Life on Other Worlds

Written by acclaimed science journalist Surendra Verma, this work is a fast-moving and accessible narrative. It outlines the historical, fictional, speculative and emerging scientific views of the possibilities of other life forms. Is there anybody out there? Are there other life forms lurking in outer space – or are they already here? Surendra Verma investigates…The rate of expansion of our universe is mind-blowing: imagine a pea growing to the size of the Milky Way in less time than it takes to blink. In all this infinite space that we cannot even see, let alone explore, it seems certain that there is some life on other worlds. Sir Arthur C. Clarke declared that ‘the universe is full of intelligent life – it’s just been too intelligent to come here’. Journalist Surendra Verma brilliantly outlines the historical, fictional, speculative and emerging scientific opinions on what alien life might be like. From Aristotle to ET via radio, religion and reincarnation, this fast-moving narrative examines history and dispels myths before focusing on the possibilities lurking in space. In a popular and easy-to-read style, Verma uses current research to speculate what life is like on other planets, how we might communicate with them, and what Earth might seem like to visitors.

Be the first to review “Why Aren’t They Here? : The Question of Life on Other Worlds” Cancel reply 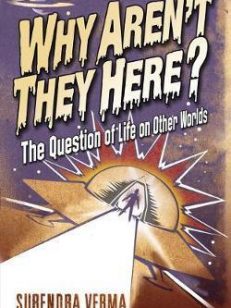 You're viewing: Why Aren’t They Here? : The Question of Life on Other Worlds €12.00
Add to cart
Create a new list