For centuries before the 1789 revolution, ballet was a source of great cultural pride for France, but by the twentieth century the art form had deteriorated along with France’s international standing. It was not until Serge Diaghilev’s Ballets Russes found success in Paris during the first decade of the new century that France embraced the opportunity to restore ballet to its former glory and transform it into a hallmark of the nation. In When Ballet Became French, Ilyana Karthas explores the revitalization of ballet and its crucial significance to French culture during a period of momentous transnational cultural exchange and shifting attitudes towards gender and the body. Uniting the disciplines of cultural history, gender and women’s studies, aesthetics, and dance history, Karthas examines the ways in which discussions of ballet intersect with French concerns about the nation, modernity, and gender identities, demonstrating how ballet served as an important tool for France’s project of national renewal. Relating ballet commentary to themes of transnationalism, nationalism, aesthetics, gender, and body politics, she examines the process by which critics, artists, and intellectuals turned ballet back into a symbol of French culture. The first book to study the correlation between ballet and French nationalism, When Ballet Became French demonstrates how dance can transform a nation’s cultural and political history.

Be the first to review “When Ballet Became French” Cancel reply 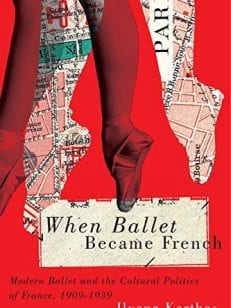