In the last decade, America’s priorities have changed. National security has become the primary concern for citizens and a top priority for government officials. Billions of dollars have been spent fighting the war on terror, and millions more have been spent by private citizens around the globe trying to understand how we got here. Investigative journalist and bestselling author of Holy War, Inc. and The Osama bin Laden I Know Peter Bergen is the authority who can answer that question. One of few Westerners to ever sit down with Osama bin Laden, Bergen is renowned for his analysis of al Qaeda and its evolution over the last decade. Now, he is breaking the story open in a way that readers have never seen before. Bergen picks up where Lawrence Wright’s The Looming Tower leaves off. He reveals the details of how al Qaeda has evolved since the 9/11 attacks, and tells the parallel story of how the U.S. government has changed its own course in response. Bergen has unprecedented insight that comes through many channels: internal documents from both al Qaeda and U.S. counterterrorism offices, in person interviews with al Qaeda members of the highest and lowest ranks, hundreds of interviews conducted with senior officials in the White House, Pentagon, CIA and the FBI, and his own experiences on the ground in Afghanistan.
A Very Long War will be the definitive account of the war on terror–its failures and successes, the major players, and its likely future.

Be the first to review “Very Long War” Cancel reply 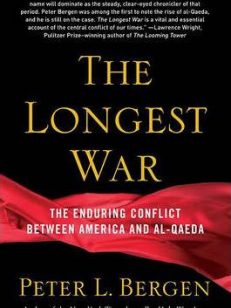