THE TOP 500 POEMS A Columbia Anthology

his is the story of poetry in English – a chronologica l arrangement of the 500 greatest poems in the English language, the poems most frequently read and sought. The poems speak to us across the centuries, including the best from Chaucer’s tales and Shakespeare’s masterpieces, the best of Donne’s spiritual verses and Pope’s satires, the best of Blake, Wordsworth, Keats, Dickinson, T. S. Eliot, Langston Hughes, Ginsberg, Plath, etc. , etc. . These are the 500 poems that ask to be read , again and again. Harmon indroduces each poet with a succinct biographical sketch, and with pithy, insightful comments situates each poem in its proper context. This is the best gathering of the best of English language poetry. 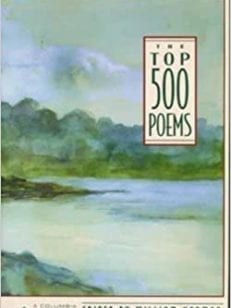 You're viewing: THE TOP 500 POEMS A Columbia Anthology €15.00
Add to cart
Create a new list