The Throne of Fire (The Kane Chronicles #2)

One curse. Two Heroes. Five days to save the world.

The Griffin fixed its hungry eyes on Sadie… “Sadie,” I said, “drop the scroll.”

The scroll seemed to have triggered every reservoir of Egyptian magic in the room. Walt and Jaz stood frozen in shock. I supposed I couldn’t blame them. This was their first monster.

I took a step towards my sister.

Ever since the gods of Ancient Egypt were unleashed in the modern world, Carter Kane and his sister Sadie have been in trouble. As descendants of the magical House of Life, they command certain powers. But now a terrifying enemy – Apophis, the giant snakes of chaos – is rising.

If Carter and Sadie don’t destroy him, the world will end in five days’ time. And in order to battle the forces of chaos, they must revive the sun god Ra – a feat no magician gas ever achieved. First they must search the world for three sections of the Book of Ra, and then they have to learn how to chant its spells…

Can the Kanes destroy Apophis before he swallows the sun and plunges the earth into darkness… forever?

Narrated in two different wisecracking voices, featuring a large cast of new and unforgettable characters, and with adventures spanning the globe, this second installment in the Kane Chronicles is nothing short of a thrill ride 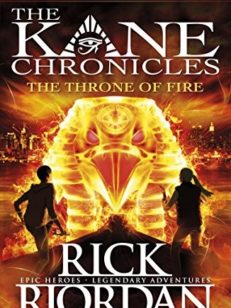 You're viewing: The Throne of Fire (The Kane Chronicles #2) €5.00
Add to cart
Create a new list