The Obamians : The Struggle Inside the White House to Redefine American Power

The definitive analysis of the events, ideas, personalities, and conflicts that have defined Obama’s foreign policy–with a new afterword for his second term

When Barack Obama first took office, he brought with him a new group of foreign policy advisers intent on carving out a new global role for America in the wake of the Bush administration’s war in Iraq. Now the acclaimed author of Rise of the Vulcans offers a definitive, even-handed account of the messier realities they’ve faced in implementing their policies and the challenges they will face going into the second term.
In The Obamians, prizewinning author and journalist James Mann tells the compelling story of the administration’s struggle to enact a coherent and effective set of policies in a time of global turmoil. At the heart of this struggle are the generational conflicts between the Democratic establishment–including Robert Gates, Hillary Clinton, and Joe Biden–and Obama and his inner circle of largely unknown, remarkably youthful advisers, who came of age after the Cold War had ended.
Written by a proven master at elucidating political underpinnings even to the politicians themselves, The Obamians is a pivotal reckoning of this historic president and his inner circle, and of how their policies may or may not continue to shape America and the world. This edition includes a new afterword by the author on how the Obamians’ foreign policy affected the 2012 election and what that means for the future.

Be the first to review “The Obamians : The Struggle Inside the White House to Redefine American Power” Cancel reply 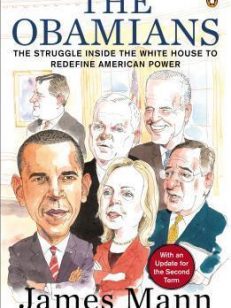 You're viewing: The Obamians : The Struggle Inside the White House to Redefine American Power €11.00 Incl. VAT
Add to cart
Create a new list