The author reveals why the Marcos saga ranks with Watergate as one of the great scandals of recent times. He describes how, under the Marcoses, Manila became an international hub for money-laundering, narcotics traffic, gambling, white slavery and child prostitution. He shows how the spectre of a communist take-over in the Philippines was used to maintain a dictator who served the ends of American businessmen, gangsters and politicians. The author goes into the background of Imelda and Ferdinand Marcos – Imelda’s poverty-stricken childhood, which shaped her lust for unbridled wealth, and her husband’s ruthlessness as he rose to political prominence, which led to him murdering his father’s arch rival.

Be the first to review “The Marcos Dynasty” Cancel reply 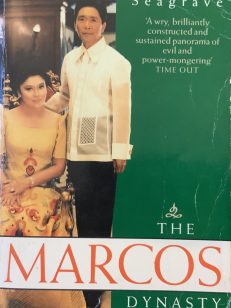 You're viewing: The Marcos Dynasty €4.50
Add to cart
Create a new list