View cart “The Johnny Maxwell Trilogy” has been added to your cart.
Pratchett, Terry

ONLY YOU CAN SAVE MANKIND Hey, If not you, who else? But what can twelve-year-old Johnny Maxwell do when he’s all set to blow the aliens in his computer game into the usual million pieces – and they surrender? They’re not supposed to do that! They’re supposed to die. And it’s only a game, isn’t it. Isn’t it?

JOHNNY AND THE DEAD Johnny’s got bad news for the dead in his local cemetery: the council want to sell the land as a building site. Well, the dead aren’t going to take that lying down. They’re beginning to find that life is a lot more fun than it was when they were…well…alive. And it’s Halloween tomorrow…

JOHNNY AND THE BOMB Mrs Tachyon is just a nutty old bag lady, isn’t she? No. Somehow, with her bunch of dubious black bags, she holds the key to different times, different eras – including the Blitz in 1941. Suddenly now isn’t the safe place Johnny thought it was as he finds himself bound up more and more with then…

Three terrific tales from the master of comic fantasy, Terry Pratchett, author of the bestselling Bromeliad trilogy and the hugely successful Discworld series.

Be the first to review “The Johnny Maxwell Trilogy” Cancel reply 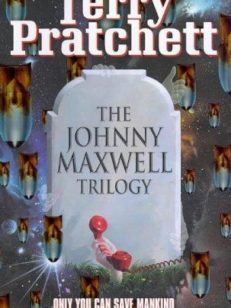