The golden scroll inscribed in five languages brings together an unlikely team for its translation: Musa Salah, a Muslim, the archeologist who found the scroll along with an old medallion in a cave near where the Dead Sea scrolls were discovered and immediately recognized its significance; Leah Rosenberg, a nonobservant Jew, an attorney, and an amateur archeologist whose husband is an old friend of the Salah family; and Father Michael Kelly, a Catholic priest whose real devotion is to the intellectual pursuits of language and archeology.Each of the translators, naturally, brings a particular prejudice to the task the three are to accomplish together. The conflict between them, as well as the events surrounding the scroll’s discovery, convince them that they need to work to put their differences aside and commit themselves to the extraordinary object before them. And they find that the scroll itself begins to change them, to challenge them to think in ways they haven’t in a long time.Finally, they realize that the scroll is all they thought it was – and more. But will the world be ready to hear what they have discovered?

Be the first to review “The Jerusalem Scroll” Cancel reply 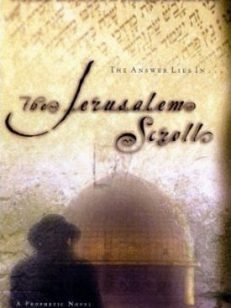