Peter Janson is a retired operative, now a highly sought after and extremely selective security specialist. The spy game ended up costing him everything that was most important to him and it would take a lot to lure him back into it. Unfortunately, the one person to whom Janson’s personal debt is so large that he could require anything of Janson is calling in his marker. Peter Novak, the legendary Hungarian immigrant and head of the Liberty Foundation – an immensely rich man who uses his wealth to rebuild and foster the growth of democratic ideals in the most ravaged and war-torn spots around the globe – has been kidnapped and faces execution at the hands of terrorist extremists. It is up to Janson to rescue him before Novak is murdered. Janson immediately puts together a top team and manages the nearly impossible task of extricating Novak, but something goes horribly wrong – something that indicates that his operation has been compromised from the start – and only Janson himself survives. Now the major intelligence services think that Janson was responsible for Novak’s death and are sending their finest operatives after him.
If Janson is to survive, and to avenge Novak’s murder, he must unravel the twisted truth that lies behind the legend that is and was Peter Novak. Because it appears that Novak is somehow, inexplicably, still alive and speaking publicly. And something serious is about to happen – something that threatens to change the course of history itself.

Be the first to review “The Janson Directive” Cancel reply 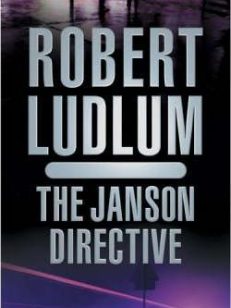 You're viewing: The Janson Directive €10.00
Add to cart
Create a new list