The author of the bestselling Secret Daughter returns with an unforgettable story in which two childhood friends—a young doctor and a newly married bride—must balance the expectations of their culture and their families with the desires of their own hearts.

Anil is the cherished son of a large family in rural India. As the eldest boy, he is expected to inherit the role of leader of his clan. Fiercely brave Leena is his closest companion. Childhood friends—in spite of the inequalities of life and circumstance—they are inseparable, but with the complications of adulthood, their paths begin to diverge.

Anil is the first person in his family to leave India, the first to attend college, the first to become a doctor. Half a world away in Dallas, Texas, he is caught up in his new life, experiencing all the freedoms and temptations of American culture against the setting of a gritty urban hospital.

Leena leaves her beloved home to join her new husband in a distant village, but the arranged marriage shatters her romantic hopes, and eventually forces her to make a desperate choice that will hold drastic repercussions for herself and her family.

Anil’s new American life begins to come apart after a tragic mistake and he is eventually drawn home, where he and Leena meet once again at a time when they need each other most. Tender and bittersweet, The Golden Son illuminates the ambivalence of people caught between past and present, tradition and modernity, duty and choice, the push and pull of living in two cultures, and the painful decisions we must make to find our true selves.

Be the first to review “The Golden Son” Cancel reply 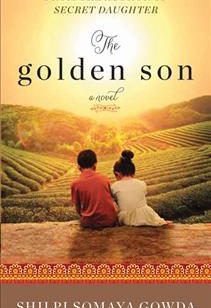