Klementina Ristovych and Ralph Dietrich are Homicide detectives on
`The Fuse’, a five-mile-long solar energy platform orbiting above
the earth that’s also home to Midway City, population half-a-million.
Ristovych should have retired years ago; Dietrich is the first cop to actually
volunteer for MCPD Homicide in its entire history. Their first case together was
bumpy, and Ralph was even revealed to be hiding a dark secret from his partner.
Now they’re investigating the death of a `Gridlocker’,
adrenaline junkies who race stripped down maglev scooters across the
Fuse’s mile-wide solar dishes through the cold vacuum of space. It’s
a case that will take them to the literal depths of Midway, and into the dark
underbellies of drug smuggling and terrorism in outer space.

Be the first to review “The Fuse Volume 2: Gridlock” Cancel reply 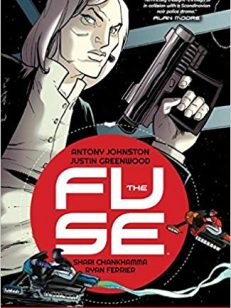 You're viewing: The Fuse Volume 2: Gridlock €12.00
Add to cart
Create a new list