In wartime Berlin, Cioma Schonhaus discovered a way of turning his talent for graphic design to good use: he forged documents which helped save hundreds of Jewish lives. His first challenge involved painstakingly recreating each of the twelve long and twenty-four short feathers on the German Imperial Eagle so that a pass stood up to scrutiny by Nazi officials. Many more forged documents were to follow, as the twenty-year-old Schonhaus attempted to stay one step ahead of the authorities. Schonhaus is breathtakingly bold – he gets himself arrested for wandering onto a military airfield and manages to talk his way out; he makes a complaint about the drunken behaviour of a policeman harassing Jewish diners in a restaurant; he goes cycling with a girlfriend in the countryside at a time when Jews were subject to curfew and banned from riding bicycles. On his final 1000-mile flight from Germany, he is forced to abandon his plan to jump on a goods train bound for Switzerland and is left with the option of swimming across the Lake Constance or cycling all the way … As those around him are one by one deported to the concentration camps, his is an astonishing story of survival.

Be the first to review “The Forger” Cancel reply 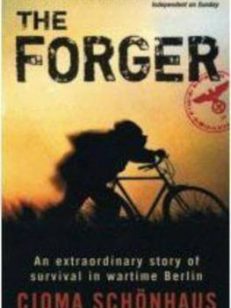 You're viewing: The Forger €5.00 Incl. VAT
Add to cart
Create a new list