“There are shades of The Twilight Zone,
Lost and Stand by Me in The Bunker, but it’s also a bit of a reverse Back to the
Future situation: They’re told what will happen, but each character will prime
themselves differently.”– USA
TODAY

“THE BUNKER tells the story
of five friends who find mysterious letters inside a time capsule they buried
long ago. And it’s no wonder none of them remember writing the letters; they’re
written by their future selves. To add to the mystery, each one warns of an
impending apocalypse, which they apparently caused. . . . . Stellar. – THE
NERDIST

In volume 2 of this ongoing
series, the future has not been saved. A bomb tore a chunk out of San Francisco.
Daniel began his job at Aspire, following in his father’s footsteps. Will the
apocalypse keep happening? Or will something trigger a change in the future? A
future where Grady Potts wields his power as president to his advantage. Where
Daniel has locked himself away, desperately seeking a cure for the virus. Where
Heidi and Billy are criminals. Where Natasha is forced to help Grady find a way
to travel into the past… …but for what purpose? To help change the future?
Or to preserve it?

Be the first to review “The Bunker Volume 2” Cancel reply 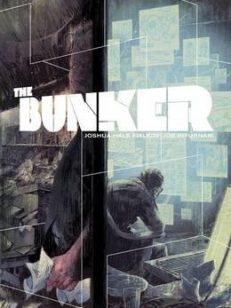