“There are shades of The Twilight Zone,
Lost and Stand by Me in The Bunker, but it’s also a bit of a reverse Back to the
Future situation: They’re told what will happen, but each character will prime
themselves differently.”– USA
TODAY

“THE BUNKER tells the story
of five friends who find mysterious letters inside a time capsule they buried
long ago. And it’s no wonder none of them remember writing the letters; they’re
written by their future selves. To add to the mystery, each one warns of an
impending apocalypse, which they apparently caused. . . . . Stellar. – THE
NERDIST

On their way to bury a time
capsule, five friends – Grady, Heidi, Natasha, Daniel, and Billy – uncover a
metal bunker buried deep in the woods. Inside, they find letters addressed to
each of them… from their future selves. Told they will destroy the world in
the very near future, the friends find, over the next few days, growing further
and further apart. Though they’ve been warned against making the wrong choices,
how do they know what the right ones are? Can the future really be changed, or
will an even darker fate engulf the world? This trade collects the first four
issues of the ongoing series that Ed Brubaker (Criminal, Fatale, Velvet)
calls, “expertly done.”

Be the first to review “The Bunker Volume 1” Cancel reply 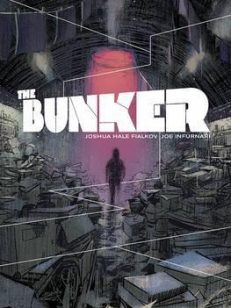