Baghdad 1917. Captain Jim Stringer, invalided from the Western Front, has been dispatched to investigate what looks like a nasty case of treason. He arrives to find a city on the point of insurrection, his cover apparently blown – and his only contact lying dead with flies in his eyes. As Baghdad swelters in a particularly torrid summer, the heat alone threatens the lives of the British soldiers who occupy the city. The recently ejected Turks are still a danger – and many of the local Arabs are none too friendly either.

For Jim, who is not particularly good in warm weather, the situation grows pricklier by the day. Aside from his investigation, he is working on the railways around the city. His boss is the charming, enigmatic Lieutenant-Colonel Shepherd, who presides over the gracious dining society called The Baghdad Railway Club – and who may or may not be a Turkish agent. Jim’s search for the truth brings him up against murderous violence in a heat-dazed, labyrinthine city where an enemy awaits around every corner.

Be the first to review “The Baghdad Railway Club” Cancel reply 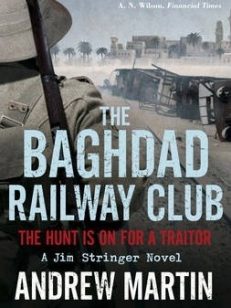 You're viewing: The Baghdad Railway Club €5.00
Add to cart
Create a new list