The Angel’s Game is set in Barcelona in the 1920s and 1930s and follows a young writer, David Martin.

In a once-abandoned mansion at the heart of Barcelona, Martín makes his living by writing sensationalist stories under a pseudonym. The survivor of a troubled childhood, he has taken refuge in the world of books and spends his nights spinning baroque tales about the city’s underworld.

His own life begins to take on a dramatic bent, in the form of a number of complex relationships: with Pedro Vidal, his patron, with Cristina, the daughter of Vidal’s chauffeur, and with Isabella, a young admirer of David and his work.

Furthermore, the history of the house he lives in begins to seep into his life – in a locked room within the house lie photographs and letters hinting at the mysterious death of the previous owner. At the same time he receives a letter from a reclusive French editor, Andreas Corelli, who makes him an irresistible offer. He is to write a book unlike anything that has ever existed—an attempt at a new religious work with the power to change hearts and minds. Yet as David begins the work, he realizes that there is a connection between his haunting book and the shadows that surround his home.

Be the first to review “The Angel’s Game” Cancel reply 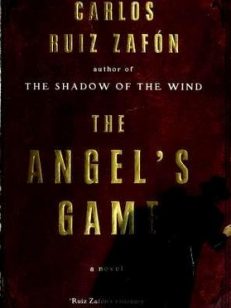 You're viewing: The Angel’s Game €6.00
Add to cart
Create a new list