Augie, the exuberant narrator-hero, is a poor Chicago boy growing up during the Depression. His mother, deserted by her husband, has taken in a tough old boarder, Grandma Lausch, who rules the family – slow-witted Georgie, ambitious Simon, super-observant Augie – like a benevolent despot. Augie’s friends set out to make their fortunes in various ways, but he sees himself as chosen for a special destiny. A “born recruit,” he makes himself available for a series of occupations, then proudly rejects each one as unworthy. Instead of allowing himself to be drafted, he takes matters into his own hands. The choices that he makes independently are – to say the least – eccentric.”Life among the Machiavellians” is the subtitle Mr. Bellow privately chooses to describe the ups and downs of Augie’s unsteady life. Augie’s own oddity is reflected in the companions he encounters – plungers, schemers, risk-takers, “hole and corner” operators like the would-be tycoon Einhorn or the would-be siren Thea, who travels with an eagle trained to hunt small creatures.In this fiftieth-anniversary reissue, with its introduction by Christopher Hitchens, this extraordinary novel is made available to a new generation of readers.

Be the first to review “The Adventures of Augie March (50th Anniv. Edition)” Cancel reply 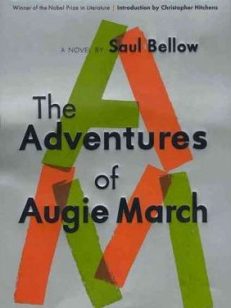