Thalberg : The Last Tycoon and the World of M-G-M

Here, at last, is the first major biography of Irving G. Thalberg, one of the most influential and fascinating figures in 1920s and 30s Hollywood and the inspiration for F. Scott Fitzgerald’s The Last Tycoon.Born with a weak heart and told by doctors that he would not live past thirty (he died at thirty-seven), Thalberg lived and worked with an uncommon intensity. At age twenty-three, he joined forces with Louis B. Mayer to build M-G-M into Hollywood’s biggest and most successful studio, noted for its style, glamour, uncompromising production standards, and vast roster of stars. His vision shaped the writing, casting, and editing of every M-G-M film, including Ben-Hur, Grand Hotel, Mutiny on the Bounty, and A Night at the Opera. Thalberg helped to establish the Academy Awards, and now the Academy’s Irving G. Thalberg Award honors Hollywood’s great producers. Thalberg tried to thwart the development of the Screen Writers Guild. And, amazingly, he tailored M-G-M’s movies to the standards of Nazi propaganda chief Dr. Goebbels in order to ensure their distribution in Germany.Thalberg is a rich, colorful biography, filled with revelations about Thalberg’s relationship with stars from Clark Gable to the Marx Brothers, his battles with Mayer, Sam Goldwyn, and other Hollywood moguls, and his marriage to Norma Shearer, the actress he wanted the world to love.

Be the first to review “Thalberg : The Last Tycoon and the World of M-G-M” Cancel reply 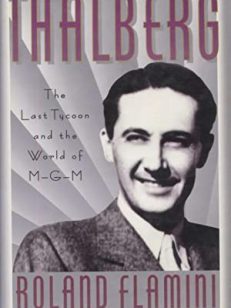 You're viewing: Thalberg : The Last Tycoon and the World of M-G-M €6.00
Add to cart
Create a new list