Does anyone, ever, have plenty of time? For centuries now poets have written that we should have time to “stop and stare”, but remind us that “time’s winged chariot” is always at our backs. Western society, and increasingly the rest of the world too, is ruled by the clock. Was it always so? Jonsson observes how the arrival of measured, accurate timekeeping became first our tool, and then our master. She notes that the wives of labourers in the past rebelled when told their husbands would be paid in money, for their time, rather than the earlier custom of payment in kind for a job of work done. They felt that the equation time equals money was somehow a dangerous one. Since then a large part of Western development has revolved around the notion of “saving time” – and by implication, money. What is the result? We now live longer on average than ever before, yet most of us feel we have no time. Technology promises instantaneous results, cell phones and computers should give us the leisure we crave, and we end up running harder to stay in the same place.

Be the first to review “Ten Thoughts About Time” Cancel reply 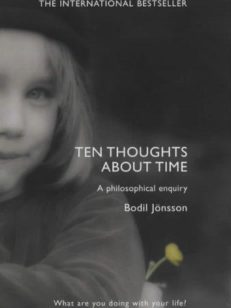 You're viewing: Ten Thoughts About Time €6.00
Add to cart
Create a new list