From the author of Masters and Commanders, Andrew Roberts’ The Storm of War: A New History of the Second World War has been hailed as the finest single-volume account of this epic conflict.

The Second World War lasted for 2,174 days and claimed the lives of over 50 million people. Why did it take the course that it did? Why did the Axis lose? And could they, with a different strategy, have won?

Ranging from the Western front to North Africa, from the Baltic to the Far East, he brings the story of the war – and those who fought it – into focus as never before.

‘One of the greatest historians of our time … His masterpiece’
Oliver Marre, Observer

‘An undoubted triumph. This, simply, is the best one-volume history of the Second World War currently available’
Laurence Rees

‘An exceptional accomplishment … the definitive single-volume history of the war … Essential’
Peter Watts, Time Out

‘In what might be his best book yet, Roberts gives us the war as seen from the other side of the hill – the German Reich’
Nigel Jones, Sunday Telegraph

Andrew Roberts’s Masters and Commanders was one of the most acclaimed, bestselling history books of 2008. His previous books include Salisbury: Victorian Titan (1999), which won the Wolfson History Prize and the James Stern Silver Pen Award for Non-Fiction, Hitler and Churchill: Secrets of Leadership (2003), which coincided with four-part BBC2 history series.

Be the first to review “Storm of War” Cancel reply 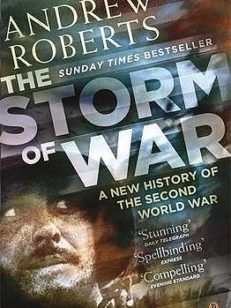 You're viewing: Storm of War €8.00
Add to cart
Create a new list