The Sputnik trawlers (named after the world’s first artificial satellite, Sputnik 1) and the later and larger Spinningdale class were originally built as cut-down side trawlers, i.e. smaller versions of the ships that used to fish distant water grounds such as Iceland. In part a history of the trawler industry, largely neglected by writers, this book also follows the history of these vessels which were readily adaptable to other methods of fishing and consequently rarely scrapped. Setting out the background to the construction of the two classes and recording some of their successes as trawlers, this book goes on to address the major conversions of some vessels for different fisheries. It highlights especially successful boats, including the Sputnik that crossed both Atlantic and Pacific oceans without mishap to start a new fishing career in New Zealand. The vessel-by-vessel list at the heart of the book features photographs, technical details, modifications, and news of each vessel’s fate, making this the definitive history of the Sputniks and Spinningdales. 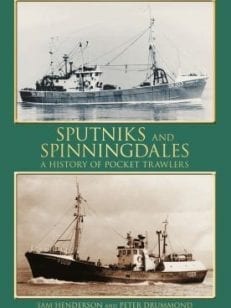 You're viewing: Sputniks And Spinningdales A History Of Pocket Trawlers €6.00
Add to cart
Create a new list