With his three enormously successful novels, John le Carre has triumphantly created a grey, violent, intricate world steeped in moral ambivalences and peopled by “the no-men of no-man’s land”. Its interpreter is George Smiley, sometimes acting Chief of the Circus, as le Carre’s secret service is known: a troubled man of infinite compassion, but a simple-mindedly ruthless adversary. Through these three novels he stalks Karla, the Soviet case officer who has been masterminding the Circus’s ruin.

Smiley is summoned from retirement to catch a Moscow Centre Mole burrowed thirty years deep into the Circus itself.

Smiley is retained to clean the Circus’s Augean stables. But his method is attack, the quarry Karla, the battleground Hong Kong, and the choice of weapons the honorable Gerald Westerby, Eastern hand, veteran of several marriages and Fleet Street hack.

Smiley’s brief is to bury a crime, not solve it. He fights his own private battle from London, to Paris to Hamburg and his last duel with Karla. 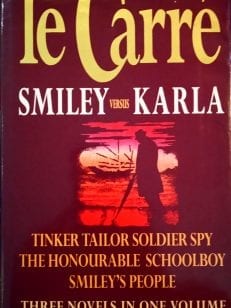