nly shadows can clear the sky

The warrior Clans are facing an enemy more dangerous than they have ever known. Darktail and his band of rogues have seized ShadowClan’s territory. Worse, many of ShadowClan’s young warriors and apprentices have joined the rogues, forcing Rowanstar and a few loyal warriors to take refuge in ThunderClan.

Though Darktail’s rogues are a threat to all warrior cats, the ties between the four ties have begun to fracture. RiverClan is heavily wounded, WindClan has closed its borders, and in ThunderClan, medicine cat Alderheart is more certain than ever that their only hope is to find SkyClan. They must fulfill StarClan’s prophecy–before Darktail’s vicious reign puts an end to all the Clans.

Be the first to review “Shattered Sky (Warriors: A Vision of Shadows #3)” Cancel reply 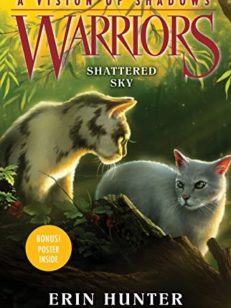 You're viewing: Shattered Sky (Warriors: A Vision of Shadows #3) €5.00
Add to cart
Create a new list