Schools Across Frontiers : The Story of the International Baccalaureate and the United World Colleges

Schools across Frontiers is a highly personal, sometimes amusing history of the international Baccalaureate (IB) and the United World Colleges (UWC), by the visionary educator Alec Peterson, who played a pioneering role in forming them. There is no other book that provides such an excellent and detailed insider’s view of the early days of the IB and UWC and now it has been brought up to the present with two new chapters. The IB is a college entrance examination that can be taken in any country and is recognized by colleges in any country. The UWC are a chain of schools in various countries, where young people of all nations and backgrounds can live and learn together. Both of these institutions have grown enormously since their establishment in the 1960s, and are gaining increasing recognition almost everywhere. There are now over 1200 IB schools. The program is rapidly expanding to include middle and primary schools. Among the fastest growing areas for IB schools are the U.S. and Canada This second edition of a book first published in 1987 contains two new chapters, one by Ian Hill and one by David B.
Sutcliffe, that provide updates on the progress of the IB and UWC, as well as a complete updated list of all the IB and UWC schools around the world.

Be the first to review “Schools Across Frontiers : The Story of the International Baccalaureate and the United World Colleges” Cancel reply 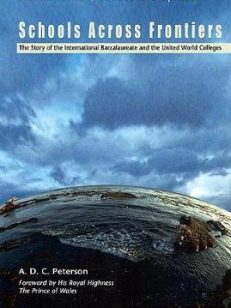 You're viewing: Schools Across Frontiers : The Story of the International Baccalaureate and the United World Colleges €14.00
Add to cart
Create a new list