Sartor Resartus (1833-4) has long been recognised as a work of the foremost literary historical importance. It marks the transition from the Romantic to the Victorian periods; its influence on the great mid-nineteenth-century flowering of American literature is incalculable.

Sartor Resartus (‘The Tailor Retailored’) lies in the tradition of A Tale of a Tub and Tristram Shandy; its successors include Moby-Dick and Ulysses. Ostensibly an introduction to a strange history of clothing by the German Professor of Things in General, Diogenes Teufeldröckh, Sartor Resartus is concerned with social injustice, with the right way of living in the world, and with the largest questions of faith and understanding.

This edition presents Sartor Resartus as it originally appeared, indicating the changes Carlyle made to later editions. Five appendices contain extensive commentaries by Carlyle on his own work.

Be the first to review “Sartor Resartus” Cancel reply 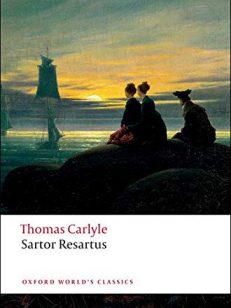