View cart “A Perfect Union of Contrary Things” has been added to your cart.
Vaino Linna

Reconciliation: Under the North Star 3

Reconciliation is the final installment in Linna’s Under the North Star trilogy. In the entire trilogy, the Koskela family serves as the catalyst of the people’s experiences in Finland over three generations. Linna’s insightful social psychological descriptions reaches breath-taking heights in this third volume.

This third part is a depiction of the further experiences of the Koskelas during the first decades of Finland’s independence. All three parts reflect Linna’s exceptionally captivating style of writing and psychological understanding of the interaction between individual feelings and social order. Part Three offers a detailed account of the various attitudes toward the social reforms, which were ultimately implemented as a consequence of the Civil War of 1918. After WWII, the nation advances on its way toward reconciliation. Vilho Koskela, Jussi and Alma Koskela’s grandson, lives to become one of the leading heroes of Väinö Linna’s other Finnish masterpiece The Unknown Soldier.

Be the first to review “Reconciliation: Under the North Star 3” Cancel reply 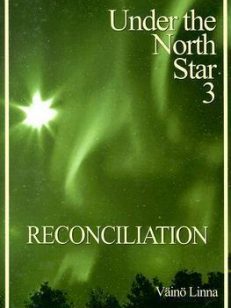 You're viewing: Reconciliation: Under the North Star 3 €28.00 Incl. VAT
Add to cart
Create a new list