Primary Colors : A Novel of Politics

Young Henry Burton, a former congressional aide of mixed race and the grandson of a legendary civil rights leader, is going through a precocious midlife crisis. Tired of the back-scratching and back-stabbing and back-watching of legislative politics, he’s wondering what to do next with his Beltway experience and abilities when Jack Stanton, the governor of a small southern state who has set his sights on the presidency, half flatters, half shanghais him into a campaign-staff job. What follows for Henry – and the reader – is an education in modern American electoral politics that in dramatic power, humor, psychological acuity, and insider knowledge beggars a hundred textbooks and a thousand lectures.Henry hopes against hope that he has at last found a leader he can believe in. He then watches in admiration and dismay as, in his quest for votes, Governor Stanton combines calculation and sincerity, dodges a draft-controversy bullet, gorges on barbecue and poaches food off others’ plates, seduces the occasional bystander, and confronts the resulting sex scandals. Henry’s attempts to manage this impulsive pol – a prodigy of altruism and appetite – force him to confront his own ambivalence about political ethics, racial identity, and love.Primary Colors has its rich rewards as a savvy insider’s look at life on the stump. But it travels far beyond mere gossip and expose and discovers a convincing world of its own, peopled by smart cookies, nutcases, and wheeler-dealers, whose public and private lives illuminate each other – sometimes by casting dark shadows. This story spans the novelistic spectrum from bedroom farce to high moral drama, and it paints a picture of the political state of the nation so vivid and authentic that one finds in it the deepest kind of truth – the kind of truth that only fiction can tell.

Be the first to review “Primary Colors : A Novel of Politics” Cancel reply 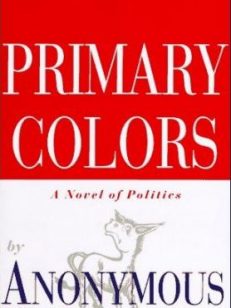 You're viewing: Primary Colors : A Novel of Politics €14.00
Add to cart
Create a new list