V. S. Naipaul has always faced the challenges of “fitting one civilization to another.” In A Writer’s People, he takes us into this process of creative and intellectual assimilation, which has shaped both his writing and his life.

Naipaul discusses the writers to whom he was exposed early on—Derek Walcott, Gustave Flaubert, and his father, among them—and his first encounters with literary culture. He illuminates the ways in which the writings of Gandhi, Nehru, and other Indian writers both reveal and conceal the authors themselves and their nation. And he brings the same scrutiny to bear on his own life: his early years in Trinidad; the empty spaces in his family history; his ever-evolving reactions to the more complicated India he would encounter for the first time at age thirty.

Be the first to review “A Writer’s People” Cancel reply 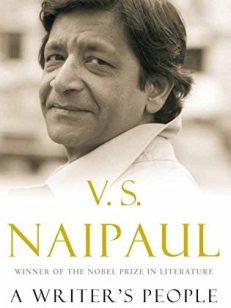 You're viewing: A Writer’s People €5.00
Add to cart
Create a new list