View cart “Deep Down with Dennis Brown” has been added to your cart.
Nina, Stibbe

“Breezy, sophisticated, hilarious, rude and aching with sweetness: LOVE, NINA might be the most charming book I’ve ever read.” –Maria Semple, author of Where’d You Go, Bernadette

In 1982, 20-year-old Nina Stibbe moved to London to work as a nanny to two opinionated and lively young boys. In frequent letters home to her sister, Nina described her trials and triumphs: there’s a cat nobody likes, suppertime visits from a famous local playwright, a mysteriously unpaid milk bill, and repeated misadventures parking the family car. Dinner table discussions cover the gamut, from the greats of English literature, to swearing in German, to sexually transmitted diseases. There’s no end to what Nina can learn from these boys (rude words) and their broad-minded mother (the who’s who of literary London).

Be the first to review “Love, Nina” Cancel reply 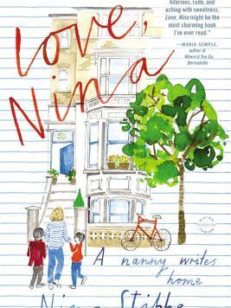