For seven decades Katharine Hepburn played a leading role in the popular culture of the twentieth century — reigning as an admired actress, a beloved m ovie star, and a treasured icon of the modern American woman. She also remained one of the most private of all the public figures of her time. In 1983–at the age of seventy-five, her career cresting–the four time Academy Award winner opened her door to biographer A. Scott Berg–then thirty-three–and began a special friendship, one that endured to the end of her illustrious life.

From the start, Scott Berg felt that Katharine Hepburn intended his role to be not just that of a friend but also of a chronicler, a confidant who might record for posterity her thoughts and feelings. Over the next twenty years, Kate used their many hours together to reveal all that came to mind, often reflecting on the people and episodes of her past, occasionally on the meaning of life.

“Kate Remembered” is a book about love and friendship, family and career, Hollywood and Broadway–all punctuated by unforgettable lessons from an extraordinary life.

Be the first to review “Kate Remembered” Cancel reply 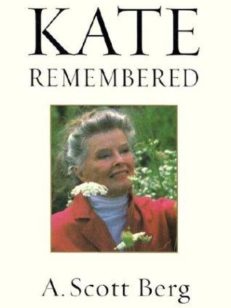