Is That a Gun in Your Pocket?: Women’s Experience of Power in Hollywood

In these pages, some of the most famous, most powerful, and most outrageous members of the film industry go on record with their war stories. From superstar actors to independent directors, women in all arenas of the moviemaking business opened up to Abramowitz. Their firsthand tales of jealousy, struggle, sexism, and success make for a fascinating behind-the-cameras look at what it is really like to be a woman in Hollywood.Here, in their own candid and provocative words, are Jodie Foster, Penny Marshall, Dawn Steel, Sue Mengers, Sherry Lansing. Polly Platt, Barbra Streisand, Paula Weinstein, Nora Ephron, Carrie Fisher, Meryl Streep, Jane Campion, Amy Heckerling, Callie Khouri, Joan Tewkersbury, and many others.Woven throughout the individual dramas is a strikingly original analysis of the films of the last four decades that fairly and accurately shows the difficulty women have faced in getting their stories on screen. With telling details from the insiders themselves, Abramowitz reveals the almost reflexive sexism that exists in Hollywood and traces how the male-dominated atmosphere influences what is seen by moviegoers around the world.

Be the first to review “Is That a Gun in Your Pocket?: Women’s Experience of Power in Hollywood” Cancel reply 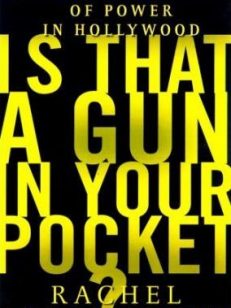 You're viewing: Is That a Gun in Your Pocket?: Women’s Experience of Power in Hollywood €12.00
Add to cart
Create a new list