In the Sanctuary of Outcasts

White bought into the modern American Dream, hook, line, and sinker. By the time he was in his early 30s, he had it all: a successful business, a mansion, luxury cars, designer clothing, fancy meals, a beautiful wife and children. The problem was he didn’t have the money to pay for it. So he began kiting checks, a strategy not lost on the FBI. White soon found himself sentenced to a year and a half in prison, and all evidence of the good life vanished.

Justice, it turned out, would be more than skin deep. White, who had worshipped the superficial manifestations of wealth and prided himself on dating the most beautiful women in school, was assigned to Carville, a prison that doubled as a leper colony. Everything about Carville was tailor-made to make White rethink his priorities, but he didn’t change overnight. He merely counted his sentence as a minor setback in his rise to fame and fortune. Then he met Ella, an 80-year-old double amputee who was ripped from her family as a child and lived her entire life at Carville. In the victims of leprosy he met at Carville, White found dignity, the kind of wisdom money can’t buy, and friendship without strings attached. As White turned his incarceration into a crusade to end the stigma of leprosy, he learned lessons in humility, generosity, and the simple transcendent beauty of the human spirit. His story is well worth reading. 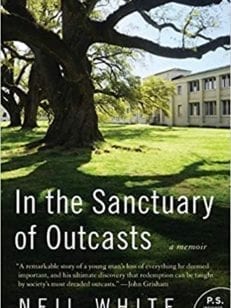 You're viewing: In the Sanctuary of Outcasts €3.00
Add to cart
Create a new list