In Retrospect : The Tragedy and Lessons of Vietnam

Robert S. McNamara, the brilliant secretary of defense for Presidents Kennedy and Johnson, helped lead America into Vietnam. McNamara believed that the fight against communism in Asia was worth the sacrifice of American lives, and yet he eventually came to believe that the war was, in fact, unwinnable. Outnumbered by those who wanted to continue fighting, he left the Johnson administration and his involvement in Vietnam behind. He refused any public comment on the war, and for almost three decades he has kept that silence – until now.
Drawing on his personal experience and a wealth of documentation – much of it only recently declassified and some presented here for the first time ever – McNamara has crafted the classic insider account of Vietnam policy making. He reveals exactly how we stumbled into the war, and exactly why it quickly became so difficult to pull out. We meet John F. Kennedy, and McNamara discloses what he believes Kennedy would have done in Vietnam had he lived. We get to know Lyndon B. Johnson, and see exactly how the war tore him apart and damaged his entire presidency. We sit in on secret meetings, we read private cables, and we hear the voices and arguments of the men who battled over America’s Vietnam policy. McNamara takes us into the Oval Office for late-night discussions with the president, into the halls of the Pentagon as military strategy is argued, and into the chambers of Congress as policy is debated. He also reveals his own inner torment as the war effort becomes increasingly frustrating, and then utterly disastrous. The result is a book that is not only history of the highest order, but a revealing portrait of the trials of leadership.

Be the first to review “In Retrospect : The Tragedy and Lessons of Vietnam” Cancel reply 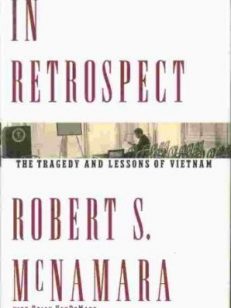 You're viewing: In Retrospect : The Tragedy and Lessons of Vietnam €27.00 Incl. VAT
Add to cart
Create a new list