Anatoly Dobrynin arrived in Washington in 1962. He was only forty-three, the youngest man ever to serve as Soviet ambassador to the United States. Amazingly he remained in Washington through the presidencies of Kennedy, Johnson, Nixon, Ford, Carter, and Reagan. Dobrynin became the main back channel for the White House and the Kremlin to exchange ideas, negotiate in secret, and set up summit meetings. This arrangement became known as the confidential channel. Through this channel and his more public duties as ambassador he came to know the presidents, their most senior officials, and many members of the American establishment intimately. In Confidence is the story of those relationships.
In Confidence is full of revelations that give us new insight into our own history, as well as into the saga of Soviet-American relations. To write it, Dobrynin spent months reviewing his own contemporary notes and official dispatches, as well as extensive material in the Foreign Ministry archives in Moscow. His memoir is an eyewitness document no student of the twentieth century can afford to miss. 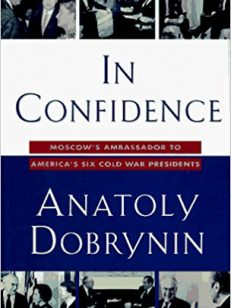