Hot Buttons : How to Resolve Conflict and Cool Everyone Down

And when was the last time you unwittingly pushed someone else’s button? Did she explode? Did you lose a promotion, an opportunity, the trust of your child?

We live in sensitive times. Everyone’s temper is quivering right at the surface, and it takes almost nothing to set off fury. When our buttons are pressed, many react by fighting back, but some of us just feel helpless and retreat from the conflict because we’re sure we can’t win the battle. We sense we’re being manipulated or bullied, but we just can’t deal with the anger in the air.

Well, now we can. Sybil Evans, a celebrated conflict resolution expert, widely known as the &quot;Conflict Coach,&quot; has writtenHot Buttons, an essential handbook with can’t-fail techniques on how to get what we want without alienating people — without pressing their buttons. Whether you’re dealing with the office sadist, an unruly child, or the love of your life — conflict can be a killer. But here’s the irony: Conflict can also work for you, can be an energizing, inspiring, even sexy force if you know how to harness it.Hot Buttons shows you how.

Her easy-to-follow Five-Step Formula is guaranteed to turn off hot buttons — yours or someone else’s. Loaded with self-test quizzes, written with humor and empathy, this wise and reassuring book can be the spur that finally changes your life.

When you know how to cool everyone down, when you can communicate so no one’s buttons are pushed and everyone’s needs are met, when you finally feel understood and respected, you have true power.

Seize the power. Turn off the hot buttons.

Be the first to review “Hot Buttons : How to Resolve Conflict and Cool Everyone Down” Cancel reply 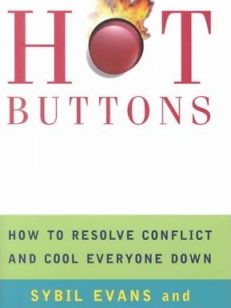 You're viewing: Hot Buttons : How to Resolve Conflict and Cool Everyone Down €5.00 Incl. VAT
Add to cart
Create a new list