Hamas : Politics, Charity, and Terrorism in the Service of Jihad

How does a group that operates terror cells and espouses violence become a ruling political party? Can a single organization be committed to political activism and charitable good works while simultaneously dispatching suicide bombers to attack civilian targets? How is the world to understand and respond to Hamas, the militant Islamist organization that Palestinian voters brought to power in the stunning election of January 2006? This important book provides the most complete and fully documented assessment of Hamas ever written. Matthew Levitt, a counterterrorism expert with extensive field experience in Israel, the West Bank, and Gaza, draws aside the veil of legitimacy that Hamas hides behind. He presents concrete, detailed evidence from an extensive array of international intelligence materials, including recently declassified CIA, FBI, and Department of Homeland Security reports. In the book, Levitt demolishes what he terms the myth of disparate wings in Hamas. The notion that the organization’s military, political, and social ‘wings’ are distinct from one another is belied by ample evidence.
In fact, the records show, Hamas meets in the mosques and hospitals it maintains to plan its terror attacks, buries caches of arms and explosives under its own schoolyard playgrounds, and transfers and launders funds for terrorist activity through local charity committees. This book catalogues the alarming extent to which the group’s political and social welfare leaders support terrorism. Drawing a portrait of unprecedented accuracy, Matthew Levitt exposes the real Hamas: an organization that threatens peace and security far beyond the borders of the West Bank and Gaza. Levitt urges the international community to take heed, and he offers well-considered ideas for countering the threat Hamas poses.

Be the first to review “Hamas : Politics, Charity, and Terrorism in the Service of Jihad” Cancel reply 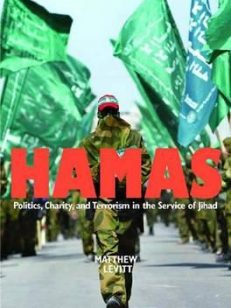 You're viewing: Hamas : Politics, Charity, and Terrorism in the Service of Jihad €10.00 Incl. VAT
Add to cart
Create a new list