Americans agree about government arts funding in the way the women in the old joke agree about the food at the wedding: it’s terrible–and such small portions! Americans typically either want to abolish the National Endowment for the Arts, or they believe that public arts funding should be dramatically increased because the arts cannot survive in the free market. It would take a lover of the arts who is also a libertarian economist to bridge such a gap. Enter Tyler Cowen. In this book he argues why the U.S. way of funding the arts, while largely indirect, results not in the terrible and the small but in Good and Plenty–and how it could result in even more and better.

Few would deny that America produces and consumes art of a quantity and quality comparable to that of any country. But is this despite or because of America’s meager direct funding of the arts relative to European countries? Overturning the conventional wisdom of this question, Cowen argues that American art thrives through an ingenious combination of small direct subsidies and immense indirect subsidies such as copyright law and tax policies that encourage nonprofits and charitable giving. This decentralized and even somewhat accidental–but decidedly not laissez-faire–system results in arts that are arguably more creative, diverse, abundant, and politically unencumbered than that of Europe.

Bringing serious attention to the neglected issue of the American way of funding the arts, Good and Plenty is essential reading for anyone concerned about the arts or their funding.

Be the first to review “Good & Plenty: The Creative Successes of American Arts Funding” Cancel reply 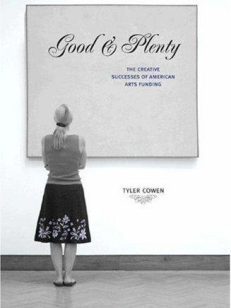