Ghachar Ghochar is a 2015 psychological drama novella written by Kannada author Vivek Shanbhag and was translated into English by Srinath Perur. Set in Bangalore, the book is about an unnamed narrator who reminisces about his dysfunctional family’s rags to riches story which results in troubling behavioural changes in each of them. The title is a made-up phrase, invented by the narrator’s wife and her brother, which means “tangled up beyond repair”.

Ghachar Ghochar was included by The New York Times in their listing of the best books of 2017 and it was a finalist for the Los Angeles Times Book Prize and the International Dublin Literary Award.

The novel is the first-person account of an unnamed, sensitive young man. He regularly visits an old-world coffee shop in Bangalore where he is drawn towards a laconic waiter named Vincent, who the man believes possess prophetic abilities. The man reminisces about his bond with a young feminist named Chitra, whom he unceremoniously cast aside, but his mind mostly wanders towards his dysfunctional family, consisting of his parents, uncle, and a divorced, elder sister. He recollects the rags to riches story of his family, and worries about the deteriorating relationship between him and his wife, Anita, who is troubled by his lack of motivation and apathy towards his family’s misdeeds.

“A Penguin original”–Page 4 of cover. 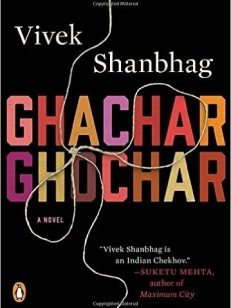