In the beginning of 1945, Germany experienced the greatest outburst of deadly violence that the world has ever seen. Germany 1945 examines the country’s emergence from the most terrible catastrophe in modern history. When the Second World War ended, millions had been murdered; survivors had lost their families; cities and towns had been reduced to rubble and were littered with corpses. Yet people lived on, and began rebuilding their lives in the most inauspicious of circumstances. Bombing, military casualties, territorial loss, economic collapse and the processes of denazification gave Germans a deep sense of their own victimhood, which would become central to how they emerged from the trauma of total defeat, turned their backs on the Third Reich and its crimes, and focused on a transition to relative peace. Germany’s return to humanity and prosperity is the hinge on which Europe’s twentieth century turned. For years we have concentrated on how Europe slid into tyranny, violence, war and genocide; this book describes how humanity began to get back out.

Be the first to review “Germany 1945: From War to Peace” Cancel reply 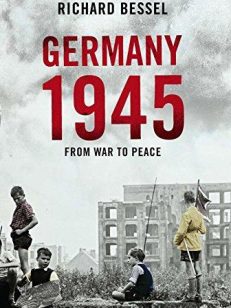