Michael Palin has certainly been busy since his days with Monty Python’s Flying Circus. In Full Circle, Palin and a film crew go on a year-long adventure visiting 18 countries along the Pacific Rim. The film was eventually made into a 10-part PBS series, to which this book serves as a companion. Not for nothing is this part of the world called the “Ring of Fire”; volcanoes punctuate the landscape, and Palin even climbs one still smoking from a recent eruption. But the difficult landscape is only one challenge in this at times hair-raising, at times hilarious, always fascinating journey around the world’s largest ocean. In the Philippines, Palin witnesses “psychic surgery”: on the Urubamba River, Palin simultaneously clings for his life to a dugout canoe as he shoots the rapids and keeps up with England’s progress in the World Cup via shortwave radio.
Whether he’s visiting a Gulag camp in Siberia or chowing down on maggots in Mexico, Palin meets the challenges of rough travel with grace, courage, and more than a little humor. Full Circle is fun to read, includes many color photographs from Palin’s adventures, and makes a terrific addition to the armchair traveler’s bookshelf.

Be the first to review “Full Circle” Cancel reply 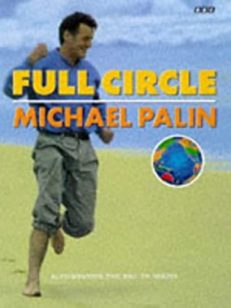