Things are hotting up in this latest thriller from bestselling author Felix Francis, in his fifth solo novel Front Runner.

Jefferson Hinkley is back. In his role as an undercover investigator for the British Horseracing Authority, Jeff is approached by the multi-time champion jockey, Dave Swinton, to discuss the delicate matter of losing races on purpose. Little does Jeff realise that the call would result in an attempt on his life, locked in a sauna with the temperature well above boiling point.

Dave Swinton is then found dead, burnt beyond recognition in his car at a deserted beauty spot. The police think it’s a suicide but Jeff is not so sure. He starts to investigate the possible races that Swinton could have intentionally lost but discovers instead that others are out to prevent him from doing so, at any cost.

‘The Francis flair is clear for all to see’ Daily Mail

‘The master of suspense and intrigue’ Country Life

Felix Francis is the younger son of thriller-writing legend, Dick Francis, with whom he co-wrote the four most recent Dick Francis Novels, Dead Heat, Silks, Even Money and Crossfire, with Felix taking an increasingly greater role in the writing. Sadly Dick died in February 2010 but his work will live on through Felix. Front Runner is Felix’s fifth solo Dick Francis novel, following Gamble, Bloodline, Refusal, and Damage.

Felix trained as a physicist and spent seventeen years teaching A-level physics before taking on the role as manager to his father, and then as author. He lives in Oxfordshire.

Be the first to review “Front Runner” Cancel reply 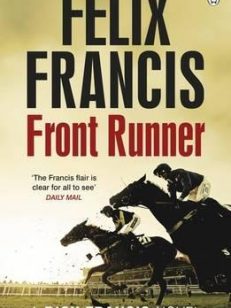