From Airline Reservations to Sonic the Hedgehog : A History of the Software Industry

A business history of the software industry from the days of custom programming to the age of mass-market software and video games.

From its first glimmerings in the 1950s, the software industry has evolved to become the fourth largest industrial sector of the US economy. Starting with a handful of software contractors who produced specialized programs for the few existing machines, the industry grew to include producers of corporate software packages and then makers of mass-market products and recreational software. This book tells the story of each of these types of firm, focusing on the products they developed, the business models they followed, and the markets they served. By describing the breadth of this industry, Martin Campbell-Kelly corrects the popular misconception that one firm is at the center of the software universe. He also tells the story of lucrative software products such as IBM’s CICS and SAP’s R/3, which, though little known to the general public, lie at the heart of today’s information infrastructure.With its wealth of industry data and its thoughtful judgments, this book will become a starting point for all future investigations of this fundamental component of computer history.

Be the first to review “From Airline Reservations to Sonic the Hedgehog : A History of the Software Industry” Cancel reply 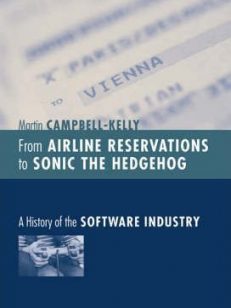 You're viewing: From Airline Reservations to Sonic the Hedgehog : A History of the Software Industry €7.00 Incl. VAT
Add to cart
Create a new list