This multi-volume series of modern Japanese economic history encompasses both the institutional aspects of Japanese economic development, and the results of econometric and cliometric research to place the key moments of Japanese economic history in a more general context. Volume one, The Emergence of Economic Society in Japan, focuses on the period from the start of the seventeenth century, when a discernible consumer population begins to form within cities, to the 1870s when the startof rapid industrialization is witnessed. This industrialization was unique amongst non-Western countries, facilitated by the emergence of their market economy. The contributors examine the reasons for these developments, tracing the emergence of a national economy in which agricultural produce begins to be produced specifically for the purpose of sale to the newly-forming urban consumer populations, and considerations of efficiency and competition are introduced into agriculture. Seventeenth century Japan is shown to be a society that was almost immediately able to provide key components of a market economy, such as communications, transport, and currency, so that economic laws began to operate spontaneously. Following its encounters with industrialized Western powers, Japan was quick to embrace their example, and uniquely was able to rapidly industrialize. Focusing on the foundations of modernity laid in this period, the volume explores whether this was a process of ‘alternative modernization’ to that experienced in the West. Written by leading Japanese scholars, and available for the first time in English-translation, the contributions have been abridged and re-written for a non-Japanese readership.

Be the first to review “Emergence of economic society in Japan, 1600-1859” Cancel reply 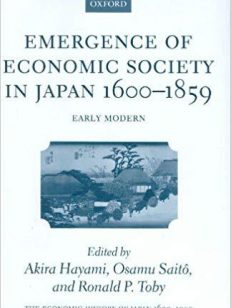