View cart “The Girl Who Played With Fire” has been added to your cart.
Dean Koontz

The Frankenstein story is updated to the 21st century by the great American storyteller Dean Koontz. Now someone new is playing god.

Frankenstein lives! And so too does his monstrous creation … but this creature of legend is a monster no more and his scarred face bears witness to his maker’s wrath. His name is Deucalion.

As a devastating hurricane approaches New Orleans, Victor Helios, once know as Frankenstein, has unleased his benighted creatures onto the streets. As New Orleans descends into chaos, his engineered killers spin out of control, and the only hope rests with Victor’s first and failed attempt to build the perfect human, whose damned path has led him to the ultimate confrontation with his pitiless creator.

But first, Deucalion must destroy a monstrosity not even Victor’s malignant mind could have imagined – an indestructible entity that steps out of humankind’s collective nightmare with one purpose: to replace us.

This is a powerful reworking of one of the classic stories of all time.

Be the first to review “Dead and Alive” Cancel reply 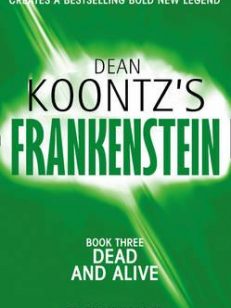